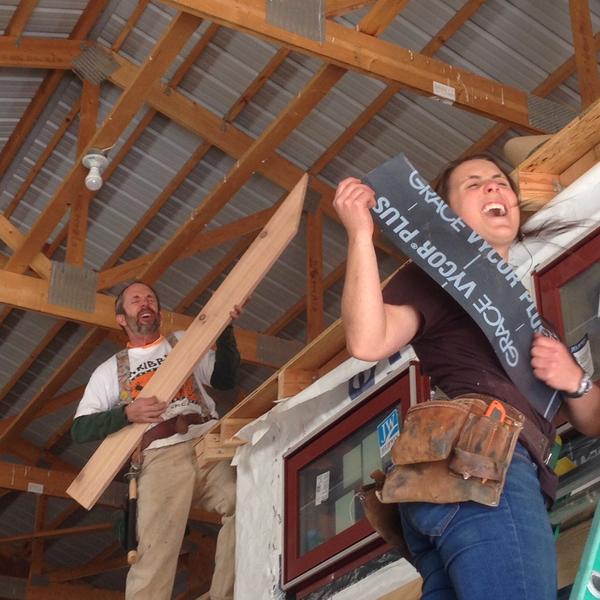 Back in October 2014, Nicki received a call from her father, Randy, who had a wild idea to build a pirate ship on top of a trailer. “That sounds cool,” Nicki told her father, “but why don’t we build something more practical, like a house?” That very weekend Nicki and Randy attended a Tumbleweed workshop that was serendipitously happening in nearby Boulder, Colorado.

Randy, who has always regretted not building a tree house as a teenager, wanted to teach his daughter about carpentry. With his 40 years of experience and Nicki’s eagerness to learn, construction of their Tiny House RV began almost one year ago.

“The best gift has been the mentorship and bonding (my dad) has offered.” – Nicki

Randy and Nicki are building on a Tumbleweed trailer and using modified Tumbleweed Cypress plans. They have chosen to name their tiny in memory of a dear friend, Uncle Paul. “Paulie” is being constructed with Uncle Paul’s tools and his passion for reclaimed materials.

The round window, front door, siding, window trim and greenhouse window are examples of salvage finds being used on Randy and Nicki’s Tiny House RV. However, as with many resourced materials, these items have taken a lot of extra labor to re-claim, store and install.

“This experience is simply a gift,” says Nicki. “It’s been an incredible opportunity to spend so much time together.”

Close friends, Al and Nancy, offered Randy and Nicki their barn and property as a build site. Because of this, construction was able to continue throughout the winter season in Colorado. Nicki’s mother, Donna, has been tracking the father-daughter team’s work hours so that they can accurately recall this data after construction is complete. They hope to be finished this summer.

“As a father, to be able to teach and learn with my daughter the basic skill of shelter, is exciting,” Randy explains. “Nicki has been learning life skills that will serve her forever.”

Randy and Nicki’s story encompasses so much of the spirit and community behind the tiny house movement. How many people can say they built a shelter with their father or daughter? It’s wonderful to see people coming together, accomplishing their dreams and learning/teaching life skills through Tiny House RV projects.

*All photos provided by Randy & Nicki