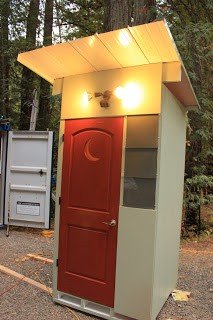 Why a compost toilet outhouse? We live on 50 acres with a one bathroom house on it – we use walkie talkies to communicate with each other on our land. We conduct 75% of our lives 500 or more yards from the house in a series of huge outdoor rooms collectively referred to as ‘the pond’. As in “Honey, when I get home will you be at the pond or at the house?” It’s where we work, play, socialize, park our guests, and have campfires, barbecues, and parties.
The more people we share these activities with, the more we need a handy bathroom facility. It’s equally obvious that there’s no way we can afford or justify putting in a second septic system. The entire property is a watershed and we don’t want to take any chances polluting, so we wouldn’t even think about doing an old school outhouse, where you just dig a pit and add lime to the cesspool. A waterless compost toilet was the only way to go, allowing us to return the nutrients and organic materials from our waste safely to the soil.

The dirty details; we were on a tight budget and had some materials left over from our tiny house builds, so we opted for an entirely DIY “glorified bucket” approach. I’ve watched quite a few compost toilet videos over time, and referred back to a couple to help us plan our project. Urine diversion is the best approach because it prevents smelly anaerobic conditions and allows more of the nutritional value from our wastes to be used by plants, but to buy aurine diverter costs about $70 – $100 and takes delivery time. I’ve ordered one now, so I’ll do an update at some point about how that works out. For now we’re removing the material to an aerobic microbe rich composting situation, and we always have a large supply of sawdust so we decided to just use larger amounts of it to soak up excess liquid and put everything in one container.
The plan; to make a small structure like an outhouse with a bench seat inside. The bench has a hole with a toilet seat and lid over it, and beneath it a bin with a contractor trash bag lining. When it’s 2/3 full of sawdust and deposited material, we’ll open up the exterior hatch to access the bin under the seat, bundle up the bag, and carry it away to our dedicated toilet compost area. We’ll make shallow holes far from the creek and pond so the bag contents will contact the earth and all its microbes, getting the composting process going quickly. Each bag will be emptied into its own hole and topped with rotted leaf litter so it can rest a full year and add nutrients and organic material to the soil.

The structure; after we outlined the plan we raided our stockpile for scrap lumber, plywood, and metal roofing. We decided to make it a square building exactly one half sheet of plywood on each side, roughly 4′ x 4′ x 8′. It seemed like a comfortable size and it minimized cutting. A shed roof was the obvious choice for simplicity, and we decided our left over birch interior ply was perfect for the bench. We gathered up extra paint samples and a door purchased for another job. It wasn’t used as intended because it had some flaws, but it’s certainly good enough for our little privy. We did have to buy two 4 x 6 x 8′ pressure treated beams to make skids for $55.
Freewheeling design; very little was planned before we started, which was great because it allowed for a lot of standing around debating pros and cons of each step with friends. Between four and six people were clustered around the project while it was built, although it was so small no more than two could actually be doing anything at any one time. Nobody got paid in anything but cold ones, and we all enjoyed every bit of it. Overall it probably took us about 20 hours of work over the course of two days to get the job done. One guy made a rustic toilet paper holder, a “sink” (a shelf holding hand wipes), and even a magazine rack. The one aesthetic touch we planned on was a traditional outhouse crescent moon cutout in the door, so I drew that so it could be traced later with a saw. After the framing was up, we decided to place the door to one side, allowing us to save an extra framing member and leaving a space for something. We all had a sense we should put some sort of window there, but we didn’t think we had anything that would work until I went poking around some old stuff and found a few square acrylic panels. We tried them out, and three of them filled the space nicely, overlapped slightly at the bottom of each for a look that reminds me of an oversize jalousie window.

Ventilation and insulation; we left the gables of the shack empty to allow for copious air flow. At the moment we still have the moon cutout in the door open too, but I might put some kind of translucent material in there pretty soon – still looking for the right scrap. Before the party, the guys decided to run a vent stack from under the bench through a hole in the wall and up to the roof. Dylan modified a Studor vent for the top of the stack so that it will keep rain out but always allow air to pass freely. We’re not insulating the room because our climate is pretty mild.

The inner workings; after we built the shell we looked for the right container. It had to be strong, durable, and commonly available, so we could start with two containers and if needed get more that would fit. We ended up with a horizontal plastic tub rated for carrying over 350 pounds of material. It’s way overkill, since lightweight sawdust will always make up a large proportion of the bulk in our batches, but better a “too strong” container than one that doesn’t quite cut it, for obvious reasons. I would have preferred to use containers with lids, but these tough heavy duty ones didn’t have them, so we went with contractor grade plastic bag liners to contain the load while we move it to the comporting site, which in our case have already been used once or twice on the job site before they go to the outhouse.

Surfaces and finishes; Dylan painted the exterior a sage green I mixed from a bunch of our sample colors from recent projects, and my five year old son and I painted the inside a darker tone of the same color. We coated the floor and the door with brick red exterior paint, and one of the guys spray painted the inside of the “window” panels bright red. Last year we cut out a crescent moon from hot rolled steel during some crafty plasma cutter sessions, which now graces the inside back wall. Dylan installed an overhead light with a vintage style bulb and an automatic shut off light switch, plus a motion sensing porch light outside above the door. A bucket was transformed into a lidded trash container, another bucket became the sawdust bin, and we were ready for prime time. With the same Sierra green roof as my first two houses, and a birch bench with routed edges and a heavy coat of polyurethane on it, this convenience station has turned out prettier than I would have ever imagined.
The reception; our house is quite a walk up a steep hill from ‘the pond’, so the privy was a welcome addition. We were proud to show our guests to it when that first party started in the afternoon, and we got a lot of compliments. By nightfall everyone knew where it was and it was definitely viewed with gratitude and appreciation. Throughout the evening as I conducted my “inspections” the only things I could smell inside were sawdust and a hint of fresh paint. We topped off our bucket of sawdust halfway through the night, and my husband opened the back hatch to check on things and had to shake the container back and forth a few times to settle a growing pyramid. One of our guys has a brilliant plan for making a teeter totter platform for the bin with a handle projecting upwards. It will allow users to occasionally flip the handle back and forth to shake the bin and settle the contents without having to go outside or touch the bin.

The cost; if you have leftover materials to work with you may get away with spending as little as $70 on your toilet seat and containers. We spent about $55 for our skids, $35 on our seat, $15 each on two containers, $10 on a fancy lightbulb, and another $15 on drinks for the crew. The guys who helped us enjoy our parties, so were happy to help with a fun no pressure project to make them go more smoothly. Grand total, $200.I’ll try to make an estimate for what it would cost to buy all the materials when I can find the time.
The impression; the compost toilet has been an unqualified success. It’s sailed through a half dozen parties with up to 60 guests over the course of these weekends and it never smells of anything worse than damp sawdust. What experiences have you had with compost toilets? Would you try this in a remote situation like ours?
-Pepper Clark
Workshop Presenter
Designer
By Tumbleweed|Tiny House Lifestyle|1 Comment