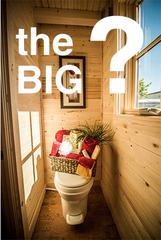 As a newbie tiny house builder – currently building a Tumbleweed Cypress – I eventually found myself stuck at the crossroads, looking down two narrow paths and forced to make the “big decision”: compost or flush?

First I plugged into cyberspace and watched a variety of informational videos on human waste (yep, that’s my life now). I learned that by choosing a composting toilet, I would be picking the greener alternative while decreasing my utility costs and eliminating my need for a black water tank. All good things! So the choice was made – compost – but I feared that this decision was perhaps my gutsiest thus far in the build.

I turned left at the crossroads, onto Humanure Boulevard. It was then that I realized my decision wasn’t complete; there are countless composting toilet options including manufactured and build-it-yourself units.

Which head was to be my maiden throne? How do I take care of the waste? And, perhaps the most important question of all, will it stink? I needed an education in composting.

Compost 101: my first homework assignment was to research the “build-it-yourself” compost toilet option. I had heard good things at the Tumbleweed Workshop from the presenter, Ella Jenkins. She’s a young, hip chick that built her own tiny house. If she can do it, well maybe I could too… 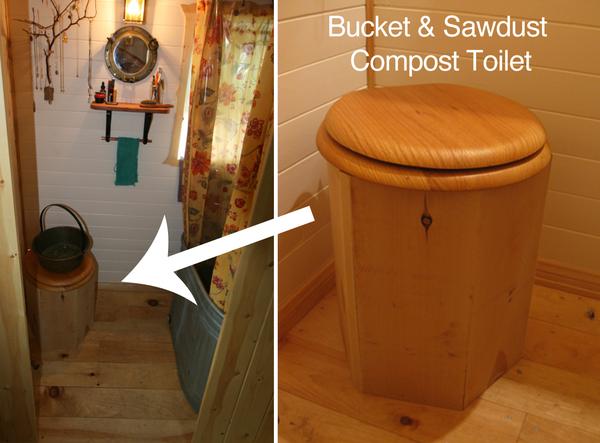 – Usage requires placing a scoop of sawdust or peat moss in the bottom of the bucket and in between each use. Empty as needed.

PROS: I could toss out my plunger! It’s small, simple, inexpensive, self-contained, and very manageable. No sewage. No water usage.

CONS: Unlike many manufactured compost toilets, this simple bucket unit would not include luxurious perks such as: 1) a ventilating fan, 2) a concealing screen (to block the sight of any.. unmentionables), and 3) a urine diverter.  I never thought that urine would play the role of “stench culprit” in this performance, but some believe that mixing the liquids and solids is the source of all-that-is-smelly in a compost toilet.

So, like any rational person without composting experience, I feared my tiny home would reek like a cattle pasture after a fresh rain… that is, until I found a few solutions to the dreaded liquid/solid conundrum. One is to have two toilets: one for liquids and one for solids. Another is to purchase a urine diverter from a manufacturer.

But what about the other perks you get with a manufactured compost toilet? Watch out for my follow up post, as my education continues and I make a final decision!