A traditional white picket fence and sweeping Texas hillside surround Jacob and Michael’s tiny house. Nestled in the Crosswinds Tiny House Community, their little abode is surrounded by a luxurious patio adorned with outdoor furniture, bistro lights, and even smaller tiny homes for their cats (which they call the “cattio”). Back in 2017, communities such as these were almost unheard of, but now-a-days, there are hundreds to choose from.

Years before we met Jacob, he was collecting tiny house photos and making big plans for his tiny house. It was a ski trip in Colorado that pushed their plans into high gear when the couple visited the Tumbleweed factory. Jacob jokingly admits that it only took an hour before he was convinced to purchase his Tumbleweed, “They have a stellar sales team… about six month later they were towing the tiny house down here. They did a great job with it. Super pleased with how it turned out.” 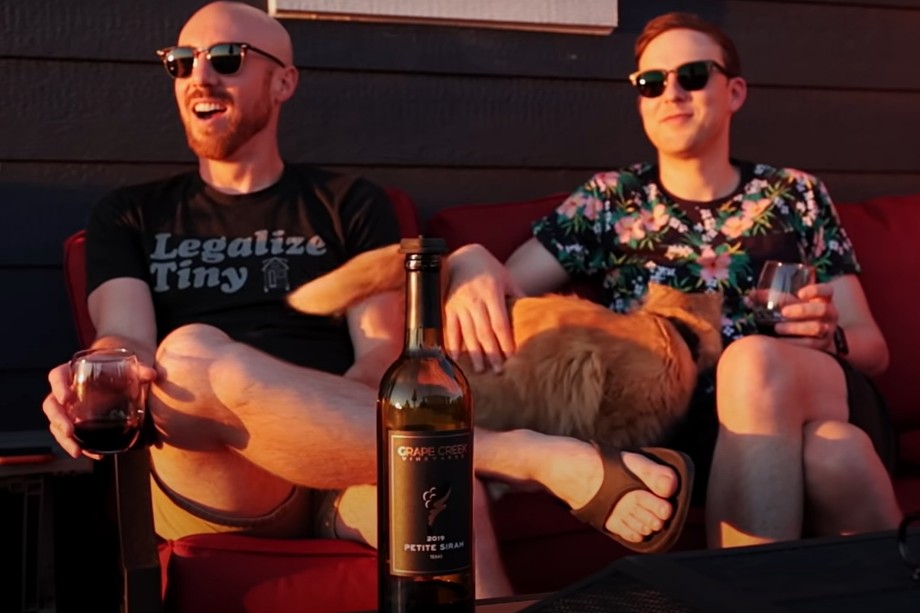 “They have a stellar sales team… about six months later they were towing the tiny house down here. They did a great job with it. Super pleased with how it turned out.”

To start with, Jacob and Michael wanted lots of storage space. The added drawers to the stairs, a secret hamper in the stairs, and extra storage in the loft. Their kitchen features several upgrades including a tiny dishwasher, a microwave with built in convection oven, and a hidden spice rack.

Perhaps the most unique element of their tiny house is the upstairs loft. With no desire to use the loft as a sleeping space, the two creatively reimagined the space as a mini living room. Adding skylights directly over the couch, they created a comfortable sitting lounge and entertainment center. To make it all fit, they found a low-slung couch on Wayfair.com and removed the legs to allow for enough head space.

This video by Tiny House Expedition really shows off how this couple has maximized their limited space. With clever storage built in, and furniture available online, this video takes you through every nook and cranny of their Farallon 26 Alta.

About the Author: Steve Weissmann

Tumbleweed CEO Steve Weissmann began downsizing his life in 2002. After moving into a super small home of around 400 square feet he learned about tiny houses and eventually saw his first Tumbleweed in 2006. Instantly falling in love with the aesthetic and concept, Steve started volunteering his time with the micro-company. In 2007 he became a partner in the business and took the helm as President & CEO. Steve has the longest tenure of any CEO in this industry and is the visionary who pioneered the first Tiny House RV and the first Green Certified Tiny House RV.