If I were forced to provide a single,
unqualified answer to the question, “Why are you building a tiny house?” I
would have to say: instantaneous love. I was 8 years old when I first saw the inside
of an RV trailer, while on a road trip with my parents. Afterwards I demanded
of my mother, “Why don’t we live in one of these?” On some level I was wounded.
My parents had always known about these perfect, tiny, ship-like houses on
wheels, and had chosen to abide in our irritatingly stationary home instead.

Perhaps
this instant love of mine was influenced by my fascination with hobos during
the Great Depression. I didn’t understand the economic desperation or the myth
of the West that had created these men. I only saw that they were tough, that
they had what it took to ride the trains. They were free. Somehow the ideas of
homelessness, wheeled vehicles, and the ability to carry your home with you
became crossed in my mind. An RV seemed to embody both that feeling of home and
the ability to leave home to my 8-year-old self.

My
childhood dream of living in an RV eventually subsided, and I moved on to other
pursuits. Skip forward a decade or so, to the day when I stumbled on the
website for the Tumbleweed Tiny House Company. And it happened again. I was
instantly, irrevocably in love. And this time it was less impractical. In fact,
it seemed that here was the answer to many of my personal dilemmas: how to live
sustainability in a culture of consumerism that was simultaneously facing a
housing crisis, how to travel the road and feel safe, and how to have my own
home while moving across the country for graduate school. I was in love with the
aesthetic of Tumbleweed, and with the lifestyle it seemed to offer. 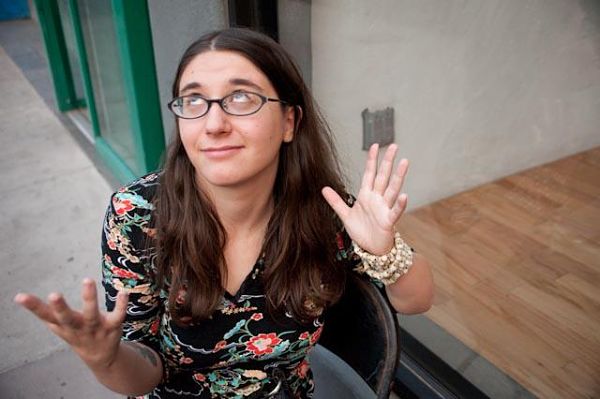 Shortly
after I had made the somewhat wild decision to actually build my own house, I
began to connect the project to my academic interests. My fields are religious
studies and anthropology, and I realized that the tiny house could be studied
as material culture, with my own experience as the basis of anthropological
research. So I’ve started to study sacred architecture as well as building
science, and I hope to one day include my tiny house experience as part of a
graduate thesis proposal.

As
a woman, a Jew, a woodworker, and the anthropologist conducting a mild field
study on myself, several questions have been raised so far. How significant is
it, in this day and age, for a woman to be working in construction, or even to
be building her own house? What does it mean to be an American Jewish
craftsperson, when almost the entirety of my family’s material culture was lost
in the pogroms and the Holocaust? What does it mean to live in a home purposely
built for wandering, when the anti-Semitic legend of “The Wandering Jew” has
been around since the Middle Ages?

I woke up in the middle of the night a few
months ago, jerked awake with the force of one thought: I am building Baba
Yaga’s house. Baba Yaga (roughly translated to “demon grandmother”) is a
Russian fairytale character, a witch who lives in a house on chicken legs. She
is a symbol of Russia. So why am I building her house? As I build, I’m also
attempting to deconstruct the folk tale of Baba Yaga, in order to shed some
light on my own roots, and my own desire to build a little house in the woods.
It is a house that walks, and is full of either danger or help, for those who
know how to ask for it.

“Little
hut, little hut, stand with your back to the woods, and your front to me!”

And
the hut turns around, and the protagonist enters. This is the beginning of my
tiny house journey. Possibly some of my questions with be answered, or there
may be new questions raised. But in the meantime, I’m building, researching,
and documenting my tiny Baba Yaga house.

About the Author: Tumbleweed

Tumbleweed is pioneering and simplifying tiny house ownership. As the largest manufacturer of Tiny House RVs in North America the Tumbleweed brand is preferred above all others.